Arsenal midfielder Abou Diaby faces a lay-off of up to nine months after tearing the anterior cruciate ligament in his left knee. 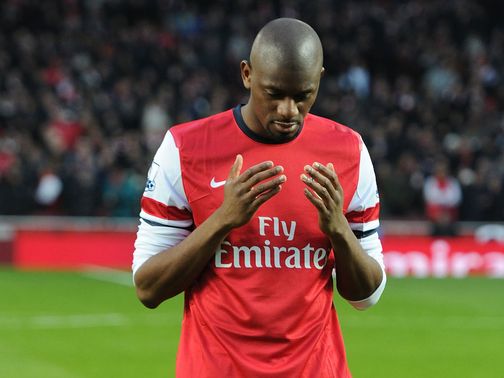 The 26-year-old France international faces an operation on the injury, which he suffered in training on Wednesday.
A club statement confirmed: "Abou Diaby injured his left knee in training on Wednesday and subsequent scans have confirmed that he has torn his anterior cruciate ligament.
"Following consultations with specialists, Abou will undergo surgery to repair the injury in the near future. Abou is expected to be out for around eight to nine months.
"The thoughts and best wishes from everyone at Arsenal are with Abou, and we all wish him a successful recovery."
Even before this latest setback, Diaby's spell in north London had been blighted by injuries ever since he joined from Auxerre in 2006 as a 19-year-old.
The commanding midfielder suffered a fractured and dislocated ankle in May of that year and recorded only 27 Barclays Premier League appearances over the next two seasons.
He eventually established himself as a regular presence in the Gunners' midfield, scoring seven times in 40 appearances in all competitions in 2010-11.
But he was restricted to only five appearances last season due to a string of injuries, including ankle and calf problems, and has played only 16 games in the current campaign.
The news on Diaby adds to manager Arsene Wenger's mounting injury problems. Jack Wilshere is currently recovering from an ankle problem which has ruled him out since the defeat at Tottenham on March 3, meaning he missed the Champions League win in Bayern Munich as well as England's games against San Marino and Montenegro during the international break.
Wenger must also do without forward Theo Walcott against Reading this weekend after he returned home early from international duty with a pelvic injury, while Kieran Gibbs is doubtful due to a virus.

That's not good, nine months out will be tough.
D

Diaby is very injury prone! The poor man has been having problems like this since 07 and now there getting worse and worse. I always liked his playstyle at the middle of the pitch, because he's a very technical player and that's not very common for tall players. The most technical tall player is Ibra, without a doubt!
You must log in or register to reply here.
Share:
Facebook Twitter Reddit Pinterest Tumblr WhatsApp Email Share Link
Top