Mancini: I will stay at Man City

Roberto Mancini has conceded the Premier League title but says he will be at Manchester City next season to try to win it back. 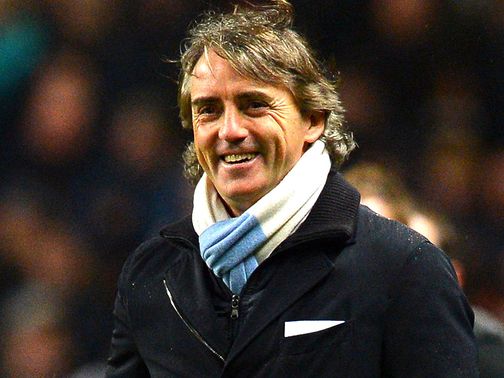 Mancini insists City's focus now should be holding off a challenge from London duo Chelsea and Tottenham for the runners-up spot.
He said: "It's over, but this doesn't change anything because we should do our best from now to the end.
"Every top team, when you can't win a title, you should try to play well, try to win all the games, and we have the FA Cup semi-final.
"We have Chelsea four points behind, Tottenham five points behind and we play another nine games. For this reason it's important to keep working hard."
The future of Mancini and midfielder Yaya Toure continue to be questioned in the press, and newspaper reports on Thursday suggested the Italian has been earmarked as the man to revive Monaco's fortunes.
Asked about the link, Mancini said: "Monaco is one of the best teams in the French Second Division and they have a good manager. I'll stay here for a long time - like Yaya!"
"Yaya will stay here for a long time. Yaya is one of the best players in the world and he will stay here for another three, four, five (years), I don't know. A long time."

He might want to stay at City but whether the board want him at the helm is another matter, I wouldn't put money on him definitely being there next season.
O

Yes, it can get, but I also do not think he will do great things next season.

The Man City, with the good players they have, it also needs a good coach and good coach but Mancini is not in the city.

I believe that for a team as Manchester City with players that are rough and like to joke around Mancini is not the best option he seems too much caring and sweet... They need someone who puts them to test and Mancini, in my opinion, can't do that.
C

They need someone who puts them to test and Mancini, in my opinion, can't do that.
Click to expand...

That's a good point. I think I'd want Mancini on my coaching staff...but not as my head coach.
M

He doesnt seem to have that 'Fergie presence' that helps him dominate Man Utd in the same way and maybe he would be better as ahead coach with a Mourinho/Capello figure as head. I think a lot of the uncertainty stems from the owners who dont strike me as the patient types that will give him 2 or 3 seasons to build a team rather than buy one.
C

think a lot of the uncertainty stems from the owners who dont strike me as the patient types that will give him 2 or 3 seasons to build a team rather than buy one.
Click to expand...

Which is why these tradings and transfers are crazy. I think Mancini can do a lot with some time, if they gave it to him. Patience can be so underrated in this game, at least for the people that run it.
D

As a Manchester United fan I hope he stay, since he's just a terrible coach. He couldn't even pass the Champions League group stage.
A

Mancini is not cut out for the team, I'll be surprised if he lasts past the next season.
S

Well I think he really needs to pull in some international titles if he wants to stay in that position. Whereas the had the hardest group in this year's Champion's League, they still performed miserably and if that doesn't change, I see no future at this club for him. Nowadays it's not enough to be good domestically.
F

For Robert staying in Manchester city it may make no difference. According to how it has been, performing if he remains on the team it may have little or no effect on their team performance. This may also lead to a worse performance over subsequent years than other comparable teams.
Many funs have been heard commenting that his presence is not highly noticed so even if he chooses to remain the chances of them loosing are very high. It may be better if Robert leaves the team as they may perform better with a new or no coach.
You must log in or register to reply here.
Share:
Facebook Twitter Reddit Pinterest Tumblr WhatsApp Email Share Link
Top